The connection of the Seastar wind farm marks the completion of the Modular Offshore Grid (MOG), Elia’s offshore power hub. Located 40 km off the Belgian coast, the switching platform bundles together the export cables from four offshore wind farms and transports the generated energy to the mainland via a shared transmission system

The MOG has been operational since September 2019, when it was connected to the Rentel wind farm. It has since been connected to three more wind farms (Northwester 2, Mermaid and Seastar), and these are now starting up one by one.

Offshore wind power is crucial to achieving Belgium's climate targets. Once all the wind farms are operational (scheduled for late 2020), they will generate an estimated 8 TWh per year on average, equal to approximately 10% of Belgium's total electricity demand. In the meantime, the federal government has begun developing a second generation area for offshore wind power, which will boost the installed capacity in the Belgian part of the North Sea 4 GW by 2030. 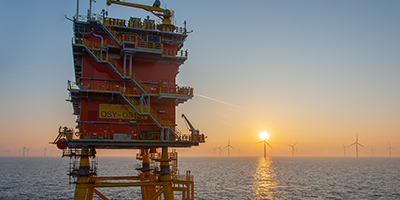