Elia finished laying the 150-kV underground electricity cables in Sint-Jozef (Rijkevorsel) in early December 2020. The work further on in Busselen (Beerse) was also completed at the end of January 2021.

As the work took longer than expected, Elia thanked local residents for their patience with a gift of non-alcoholic bubbly, so that they could toast the end of the work together while keeping a safe distance apart.

With the Rijkevorsel-Beerse project, Elia is laying underground electricity cables in the North Kempen region. This is important to continue ensuring security of supply in the area. The work in Rijkevorsel and Beerse was largely completed in December 2020, and Elia continued with asphalting work and repairs to ditches and verges in Busselen (Beerse) in 2021. Homes remained accessible throughout the work.

Elia thanks local residents for their patience during work

As the work took longer than expected, Elia wished to thank local residents for their patience. In early January, residents of Zuiderdijk, Klundert and Kievitsheide received a bottle of non-alcoholic bubbly at their doors, allowing them to toast the end of the work together, while keeping a safe distance apart. With the final work in Busselen now also complete, Elia wanted to do the same for residents here too, so they were also treated to bubbly and a thank you card.

Watch the reactions of local residents below. 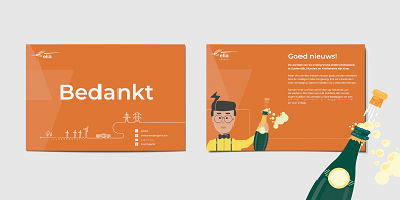