The ElectriCITY educational kit will help your pupils get to grips with the complex topic of the energy transition in a fun, practical way. 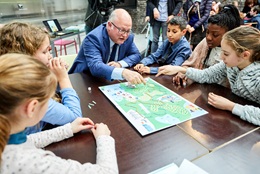 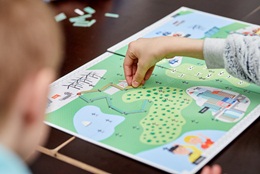 The energy transition... in a child-friendly package

The educational kit was specially designed for children in the fifth and sixth years of primary school and the first and second years of secondary school.

Each box contains three copies of the ElectriCITY board game (so the children can play in two teams of four on each of the three boards), a set of game rules, a teacher’s guide and a series of sheets with experiments for your pupils to try.

Access the Elia vlog on the energy transition here (in Dutch)

ElectriCITY was developed jointly by:

We recommend saving these documents on your computer or on a USB flash drive.
Contact us
Would you like to request a copy of the game for your school, or would you like more information?
electricity@elia.be
office: +32 (0)800 18 002
This website uses cookies to provide you with an optimal browsing experience. Some cookies are strictly necessary for the operation of this website and cannot be rejected, while others are used for analytical/functional/targeting purposes and can be rejected. For more information, please consult ourCookie Policy . You can manage/change your cookie preferences at any time. If you do not manage your preferences, only the cookies which are strictly necessary will be accepted.
I accept
I refuse
Cookie preferences