This year’s Challenge focused on sustainability, meaning it formed part of the many initiatives organised by the Group which have its ActNow programme in mind.

The OIC is organised on an annual basis by the Group’s Belgian and German subsidiaries (Elia and 50Hertz respectively). Through collaborations with start-ups, the Group aims to foster a culture of innovation across its activities and workplaces.

During the competition final, which was held in Brussels today, the judges chose Sentrisense as the winning team, explaining that its proposal holds many immediate advantages for transmission system operators and can be easily scaled up: the continuous monitoring of overhead lines via sensors and constant analysis of the associated data allow the lifespans of these lines to be extended. 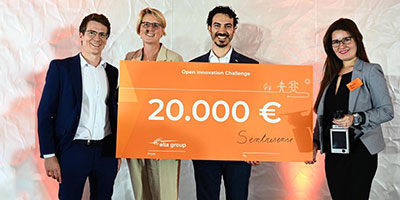